A TRANSCRIPTION FROM THE BUCKS HERALD 8th JUNE 1918

“We deeply regret to record the death of the Rev. R.F Ashley Spencer Vicar of Tylers Green. On Thursday May 30th he attended a meeting of the Ruri-Decanal Conference at Marlow, only arriving at Loudwater Station on his return at about 10pm.

He had no carriage to meet him, having arranged to walk home. He walked from the station along the private road to Rayners, and later half way home was taken ill with internal pains so severe that he felt it almost impossible to go any further and contemplated – it being a warm night – the possibility of having to remain until morning lying on the grass by the side of the road. However, remembering that his two dogs of which he was devotedly fond, called for attention, he managed with a great effort to struggle home. Mrs Spencer had been for some days taking a rest cure at a nursing home in Wycombe. Feeling very ill on his arrival at the Vicarage, Mr Spencer sent for the District Nurse, and a telephone message was sent to Dr L.W. Reynolds of High Wycombe, who came up at once. Dr Reynolds found him suffering from acute Peritonitis and sent his car in the morning to remove the patient to the same nursing home where his wife was staying, the District Nurse accompanying him. Dr Reynolds, desirous of a second opinion called in Dr Huggins, but the patient’s heart (which had long been affected) was in such a condition that both doctors agreed that an operation was out of the question, and the end came from heart failure just before 7 o clock the same Friday evening. Mr Spencer retained his consciousness until very near the end and was able to give a message to his wife, and even to choose the hymns for his funeral.

The late Rev. Robert Franklin Ashley Spencer who was born in County Wicklow Ireland was the son of a well-known London clergyman. He was presented to the living of St Margaret’s Tylers Green, by the Late Earl Howe in the year 1883 on the retirement of the late Rev. W H Pengelley. Mr Spencer’s father was a Clergyman of the old evangelical school, and the son a moderate high church man. Mr Spencer at the time of his death, had held the living for nearly 35 years. He was a very earnest and popular clergyman, and also found time to give valuable service in public affairs in the District and County. He was a member of the County Council of the Board of Guardians and rural district council which he joined in 1886 and the Chepping Wycombe Parish Council. 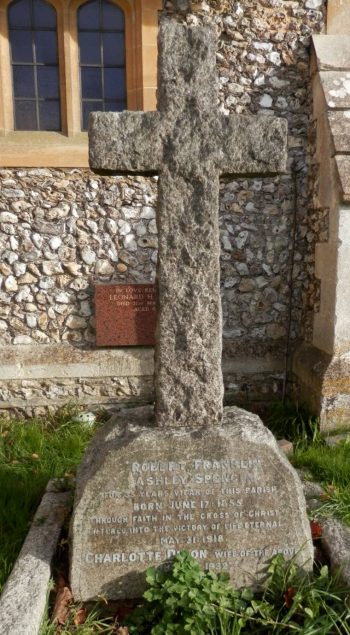 He had occupied the Chair of each Body, and also been Chairman of the Finance Committee of the Guardians and of the rural district sanitary committee.He was a member of Wycombe Joint Burial Board. Chairman of Wycombe Rural Food Control Committee and a Trustee and Member of the Committee of the South Bucks Friendly Society. His services in connection with these public bodies are well known to all of the residents in the district. Deceased was a Conservative and Secretary of the Tylers Green and Penn branch of the South Bucks Conservative and Unionist Association, being a constant attendant at its meetings. At an early date in the War he applied for a Naval Chaplaincy and served for many months in one of the hospital ships of the Grand Fleet in the North Sea.”

His grave is in the south-east corner of the Churchyard in a position chosen by himself during his lifetime.