Until 1894, there were no civil parishes, only ecclesiastical parishes, which, through their vestries, set and collected their own parish rates, administered poor relief, repaired highways and appointed constables. The old ecclesiastical parish of Penn consisted of six separate hamlets: the area around Penn Church; Knotty Green; Forty Green; part of Winchmore Hill; Penn Street (until the new parish of Penn Street & Holmer Green was formed in 1849); and Tyler End Green, which ran from Rayners to Potters Cross and, from the mid 19th century, up to the Hazlemere cross-roads. When the settlement of what we now know as Tylers Green began, from 1800 onwards, largely through illegal encroachment on the green, it grew as an extension of the hamlet of Tyler End Green on the Penn side and borrowed the same name, eventually dropping the ‘End’. 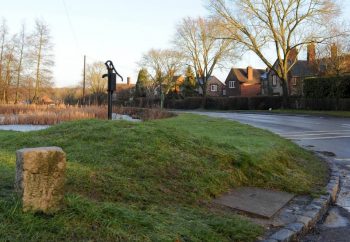 A  map of the Consolidated Chapelry shows that the new boundaries of St.Margaret’s were marked on the ground by 8 boundary stones starting with No.1 at Rushmoor Pond (at the end of Curzon Avenue) and going in an anti-clockwise direction up to No 8 by Widmer Pond opposite the Red Lion.   The stone in the photo is in the position of No 8 and is inscribed, T – G / S M.C C / 1863. It had wandered and was found at the end of Nursery Lane on the corner facing the common.   It has no number, but is likely to have been No 8 and so has been returned to as near to its former position as we can judge.

You can still see another of the stones against the wall outside the entrance to Rayners, which was marked “T.G. St.M. C.C. 1863 No 7” when I first saw it, but now only the first two lines are visible above the ground.   A third stone, No 6, on the Wycombe Heights Golf Course about 100 yds above the clubhouse, marks the southern boundary of the new Consolidated Chapelry.  It has now been reset a few yards to the side of a track, repainted and has a small information board.

The coloured plan (below) shows the present boundaries of St Margaret’s parish, which take in all the Tylers Green ward of Chepping Wycombe Parish Council (CWPC), except for half of Kings Wood, as well as taking in two largish chunks of Penn and Hazlemere civil parishes.

Area 1 – This area was taken out of St Margaret’s parish in 1955 to avoid splitting the new housing estate of Micklefield between two churches. Otherwise the ecclesiastical boundaries of St Margaret’s still remain unchanged from 1863.

Area 2 – This is the part of Penn parish fought for by Philip Rose and it adds to St Margaret’s both sides of Hazlemere Road and Elm· Road from Curzon Avenue down to Widmer Pond. The Red Lion and shopping area remain in Penn ecclesiastical parish, but the first five cottages down Beacon Hill from Slades Garage (Walnut, Wren, Pistles, Well, Rayners) are in St Margaret’s although still in the civil parish of Penn. Thereafter, the ecclesiastical boundary follows the civil boundary roughly down the middle of Beacon Hill.

Area 3 – When the new civil parish of Hazlemere was created, in 1987, this area was transferred from the former Hazlemere ward to the Tylers Green ward of CWPC. Thus the lower half of Kingswood Road and Hillside Road up to the junction with Hearn Close, with all the roads off them, are now in the Tylers Green ward of CWPC, but are still in the ecclesiastical parish of Hazlemere.

Area 4 – Three quarters of Manor Road have always been in Hazlemere ecclesiastical parish, despite being included in tbe Penn postal delivery area. In 1987, the whole road was taken into the new civil parish of Hazlemere, but the first quarter, up to Manor Farm, remains in St Margaret’s.

About one third of the new Manor Farm estate, including the First and Middle schools and the Rose Avenue shops, was in the Tylers Green ward of CWPC, until joining the new civil parish of Hazlemere in 1987, but remains in St Margaret’s. 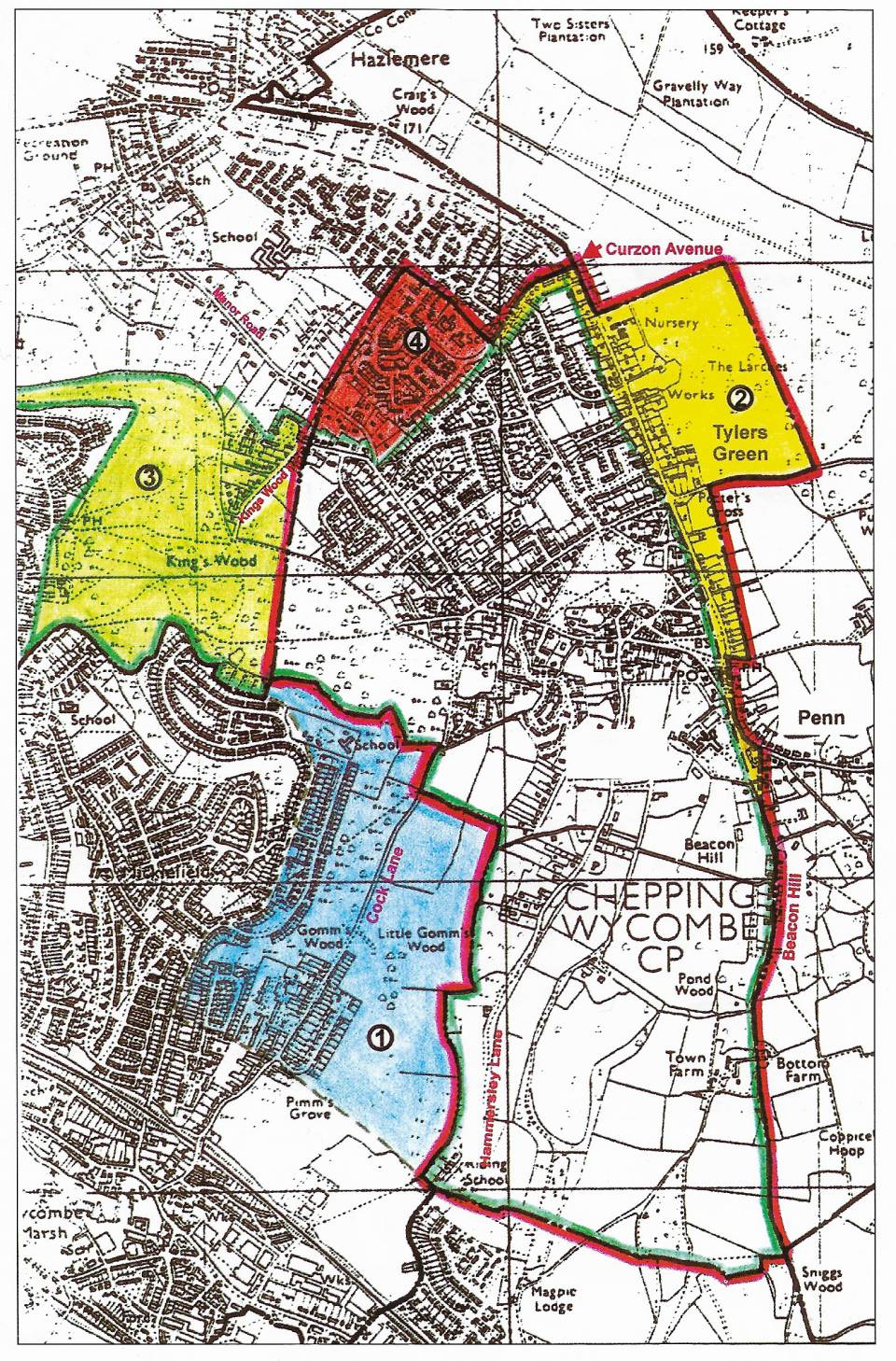