“to crown our labour with success” – Shelf, Halifax, Apl 29 1851
Dear Sir, By the enclosed circular you will perceive that we are endeavouring to erect schools for the uneducated and poorer classes of society in Shelf. I don’t know that I pursue a more useful course for the benefit of the people and the property in the place, than to erect schools, where the children may receive a suitable education in connection with the Church Establishment in our land, and feel encouraged that you will excuse me for appealing to you for help under such circumstances. If the money for the building could be procured in the district I certainly should not think of appealing to the public at large. I endeavour to raise the endowment in accordance with the advice of my respected Diocesan, who has kindly offered £10 towards it. The Church of St Michael here is well attended and the number of scholars in the Sunday School remains the same as stated in the circular. I must it will still please… to crown our labour with success and in every plan wish believe me. Yours very faithfully John Power.

So wrote the Rev. John Power in 1851 to William Priestley of Tadcaster, when attempting to secure funds towards the construction of a school in Shelf, West Yorkshire. Born in Merevale Warwickshire in 1818 he consistently displayed the highest levels of charitable and philanthropic ideals not always so evident in the Victorian Clergy. After marriage in March 1853 in York to Elizabeth Harriet Graham he eventually ended his Yorkshire Living, and moved south to the Isle of Wight to become the Vicar of All Saints, Newchurch, he was also Chaplain to the Mission for Seamen. Back on the mainland he succeeded Walter Gibbs in 1862 to become just the second Vicar of St. Margaret’s Tylers Green, a post he held for six years. Having both a wife and daughter, not to mention a half-sister in his household, it was apparent that the existing accommodation for the Vicar, Yew Tree Cottage (now The Red House!) was too small, there was certainly no prospect in raising the funds from the inhabitants of the village, who Power described as “amongst the poorest of the poor” so Earl Howe and Philip Rose became the principal benefactors, the new Parsonage House being completed in 1865.

By October 1868 Power was on the move again, this time westwards to Exeter, where he was appointed Vicar of the Bedford Chapel, Bedford Square, he once again demonstrated his charitable principals, by introducing, despite some opposition “Penny Dinners for Poor Children”, he felt that even if only a penny was paid the recipients would not be regarded as paupers. The Chapel itself no longer exists having been destroyed by enemy action in May 1942.

After a brief spell at Dodbrooke Nr Kingsbridge he ended his days as Vicar to the parish of Altarnun on Bodmin Moor, he died on the 6th February 1887 aged 69 and is buried in the Churchyard at St.Nonna’s Altarnun. 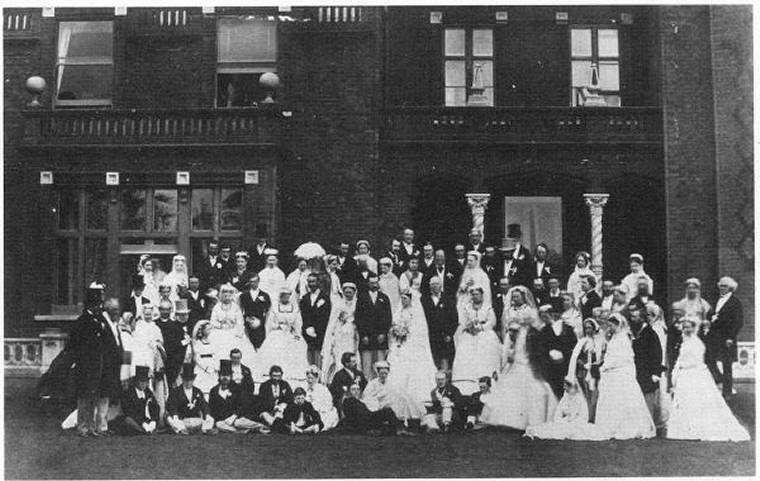 Above is the only known possible photograph of John Power. It is of the wedding of Sir Philip Rose’s daughter Louisa in May 1868, it is known that John Power assisted at the wedding, (there were 2 other vicars officiating). If you look closely at the bottom left of the photo next to the man in the grey top hat you will see what appears to be a vicar. Unfortunately we cannot confirm this. This is the earliest picture in the Village archives.