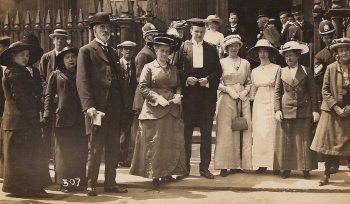 This highly evocative and delightfully informal photograph, taken in the summer of 1913, shows the soon to be Vicar of St. Margaret’s Tylers Green, Gerald Hayward, outside Christ College Cambridge following presentation of his B.A. On his right are his proud parents, William Dunning Hayward and Mary Louise Blackwell Hayward (nee Hansell). His father was from Dorchester, whilst his mother came from North Shields in Northumberland, on his left stands his younger sister Gladys Mary Hayward, at this time the family home was in Broadstairs Kent. He married in May 1917 Dorothy Ellen Phillips who also came from the Kent town. There were no children.

He was born in May 1891 in Croydon, where his father ran a printing and publishing business and after a successful academic career, which also saw him obtain an M.A. in 1917, he became Curate at Christ Church Croydon, before holding the living at Christ Church Chelsea from 1915 until 1918. He saw service in the Great War as a Senior Chaplain to the Forces and in August 1918 was presented by Earl Howe with the living of St. Margaret’s, his annual income however was less than £300.

So began his 33 year tenure as the 6th Vicar of Tylers Green, during which time he saw to the spiritual needs of many of the local inhabitants, however he was just a spectator in 1919 at what must have been the largest funeral then seen at St.Margarets, following the death of the second Sir Philip Rose, by this time Sir Philip had converted to Catholicism and his funeral took the form of a Requiem Mass held in the chapel at Rayners followed by internment in the family vault at St. Margaret’s, Priests from local Catholic churches including St Augustine’s on Amersham Hill presided at the service. It appears that not all his services took place in Tylers Green, as in 1929 he attended the funeral of the 4th Earl Howe in Holy Trinity Penn Street and in 1932 he played a part together with the then Vicar of Holy Trinity Penn, the Rev E Smith, in the funeral service of Sir Donald MacLean. However, one of his more intriguing marriage services was when he officiated at the wedding of one Edgar Whyte better known as “Eddie Steele” when he married in St Marys Appledram Kent in 1939. The Southern Area Heavyweight Boxing Champion had fought Tommy Farr among others.

The fabric of the Church continued to change during Gerald Hayward’s incumbency, new vestries were installed in 1922, an extension to the Chancel and a new east window in 1932, the pews were cleaned in 1934 and the oak doors were added in 1935.

He died suddenly at his home in Tylers Green on Sunday 12th August 1951 aged just 60. He had conducted the morning services at St Margaret’s, but complained of feeling unwell during the afternoon and died a few hours later. After a Memorial Service at St Margaret’s on Wednesday 15th August a cremation took place at Woking Surrey. He was survived by his widow Dorothy who died in Penn in 1973.