Village historian Miles Green has unearthed the following letter from the files of the Church Commissioners in London. It was written by the Rev. Ashley Spencer, vicar of Tylers Green from 1883 to 1918 (Ashley Drive is named after him), and it illustrates just how important Widmer Pond – the pond on the common – was to villagers at the time, because it was the only water supply for the population. Unlike today, ducks were positively discouraged because they could contaminate the water.

The letter – reprinted exactly as written – was written to the pond’s owners at the time, the Ecclesiastical Commissioners, on June 11th 1893. It reads:

“I have been deputed as Vicar of this Parish to write to you with regard to a large Pond which forms the principal, and in such times as these, the only water supply of the greater portion of the inhabitants numbering over 1,000 in the radius.

Mr Dan Clarke of High Wycombe, your representative, has advised me to write for your permission to clean out the Pond, now that it is nearly empty, and this we are quite willing to do, at our own expense if necessary, – but we want more than this – we want to put it in thorough repair, and fence it round etc., etc. If you as Lords of the Manor will not only give us the permission to do so, but will also (as you have done in the case of the Common here) take it under your protection, and put up a board similar in Terms to that you have had put up to preserve the Common.

The Pond is called Widmer Pond and is just on the borders of High Wycombe Civil Parish – indeed the boundary line between the Unions of Amersham and Wycombe passes through the middle of the Pond. In times past we have spent over £200 on the Pond and Pump, with the most unsatisfactory results as the Pump has been destroyed, and the filter tank we had put in is thus rendered useless.

Both Sir Philip Rose and I feel it is useless to spend any more money on it as private individuals, unless and until the Pond is properly protected as belonging to some public body who will if necessary prosecute offenders.

The matter is urgent for we have a water famine here now, and want to prevent such a thing happening again, if we can, by making the Pond once more sound and Clean.

I should be very glad of an answer by return, at all events giving us leave to Clean the pond, and the rest could wait until I have seen you. Our meeting last night was a representative one – and we have adjourned until next Saturday, when I hope to be able to report favourably the results of my application.

The vicar was successful in his plea, although a fence was never erected. 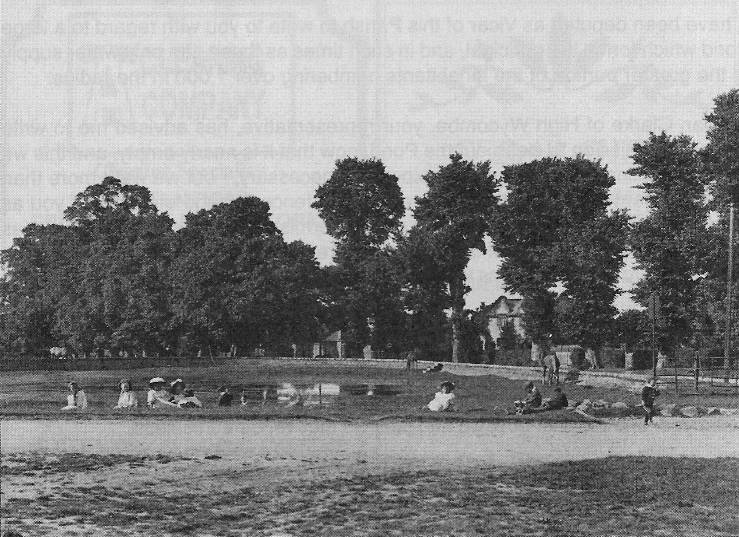