Alcock & Brown – the first flight non-stop across the Atlantic 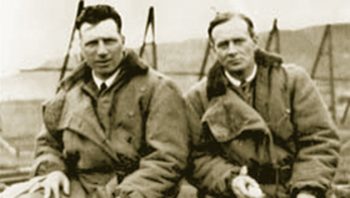 It may come as a surprise to many people that there is a small memorial stone to Sir Arthur Whitten Brown on the very bottom of the SW buttress to the nave of St Margaret’s Church in Tylers Green.

On June 14th 1919, the first non-stop flight across the Atlantic was accomplished by John Alcock (pilot) & Arthur Brown (navigator) with no modern aids, a damaged exhaust and a non-functioning wireless. They took off from St John’s, Newfoundland in the open-cockpit modified version of a WW 1 Vickers Vimy twin-engined bomber and landed 1880 miles and 16 hours later in Connemara, Ireland. This is the account my elder son, then aged 12, wrote for Village Voice 20 years ago.

‘As there was no compass in the craft they had to take their bearings from the stars. It was very cloudy which meant they only had four chances to take a bearing from the stars. The first bearing was taken after six hours. Five hours later they ran into very thick cloud. Alcock, who was piloting at the time, did not even know which way his plane was going. Suddenly it stalled and fell toward the sea. Only 150 meters above the waves the clouds parted and Alcock was able to gain control. 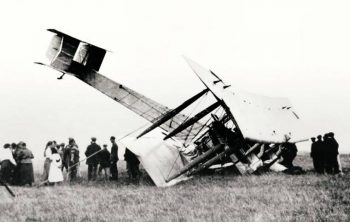 An hour later they ran into snow and Brown had to keep climbing out of the cockpit onto the very slippery fuselage to wipe snow and ice off the engine air intakes. Next morning, after 16 hours 30 minutes (at an average speed of 115 mph), they crash landed into a bog in Ireland’ (thinking it was a green field).

The first to greet them were staff from the Marconi radio station who refused to believe that the fliers when they insisted ‘We are Alcock and Brown. Yesterday we were in America’.

It was a triumph of navigation, flying skill and rare courage for which they were both knighted by George V a few days later. They also won a Daily Mail prize of £10,000.

Alcock was killed only 6 months later when the plane he was flying to the Parish Air Show, crashed in fog. Three days earlier he had been at the Science Museum for the presentation of the plane in which they had made the crossing. A new book about the flight, by Brendan Lynch, Yesterday we were in America, is due out later this month (i.e. in 1989). 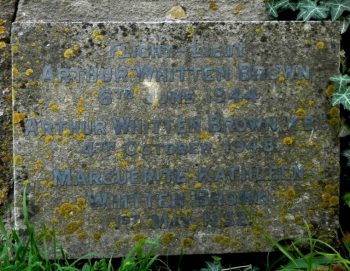 The memorial stone, which has been moved – originally it was just to the west of the main door – also records the names of his wife and only son who was killed on D-day, 6th June, 1944, aged 22, flying a Mosquito fighter-bomber over Holland. Sir Arthur was an American by birth, but was brought up in England and took British citizenship when he joined up in 1914. He died in his sleep on 4 October 1948 from an accidental overdose of Veronal, aged 62.  His wife, Kathleen Kennedy came from Sweethope Cottage in Manor Road which is about a mile from St Margaret’s.