What’s the link between a scarf, Queen Victoria, The Horse and Jockey, and St Margaret’s church? 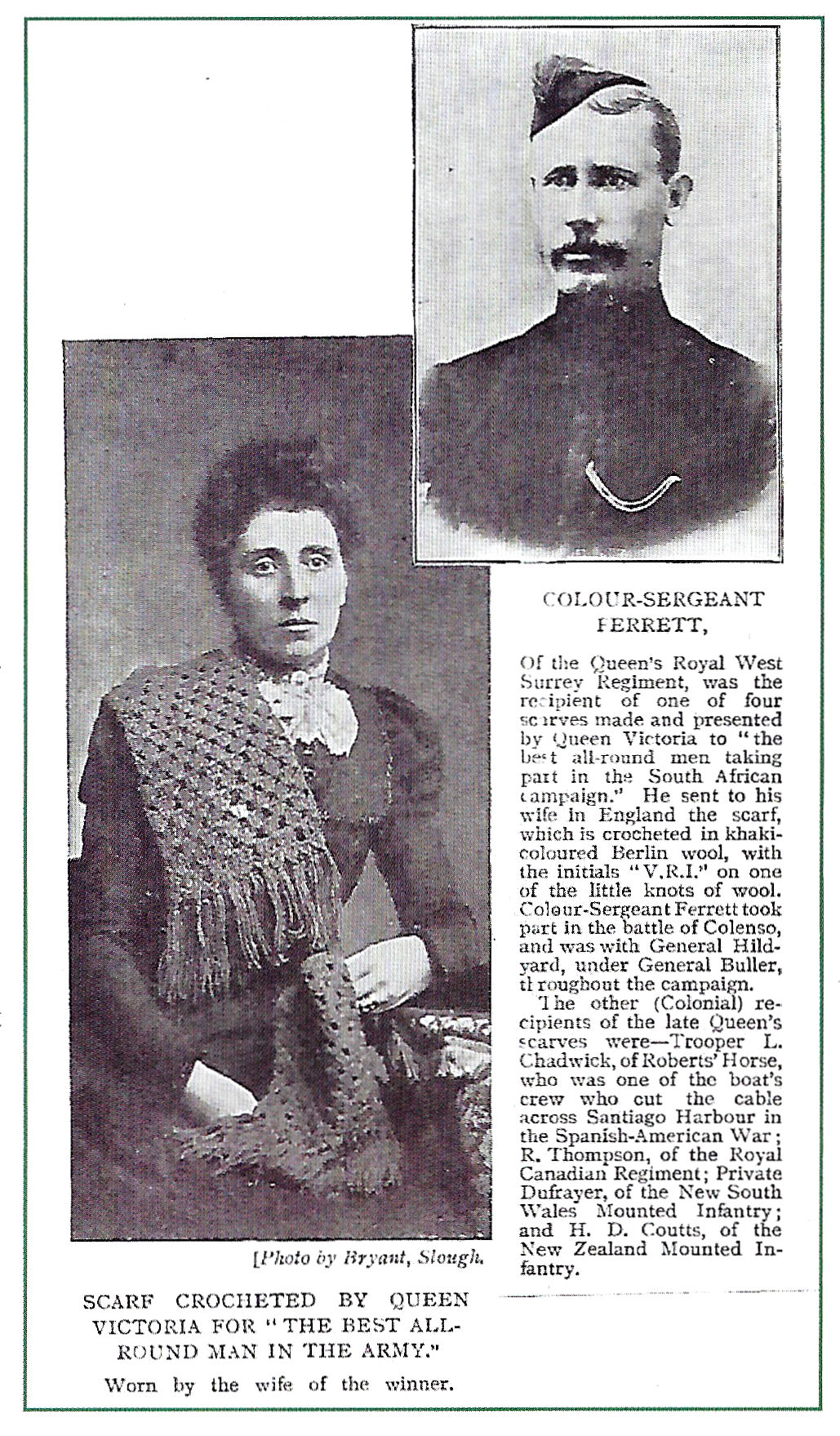 Back in the 1980’s 1 was looking through a box of old family photographs with my father when 1 noticed an old sepia photograph of a scarf. “What’s that?” I asked. “Oh that’s Uncle Tom’s scarf hanging on your Nan’s washing line” my father replied. “I wonder what happened to that?” The story that he relayed intrigued me and so my quest began.

My Great Uncle Tom Ferrett was born in September 1863 in the hamlet of Holybourne, near Alton, in Hampshire. The family were from humble beginnings and his father worked on the land in common with many folk in rural Hampshire. Up until the industrial revolution it would normally have been expected for children to grow up following in their father’s footsteps. But during the mid to late 1800’s big changes were afoot. With the advent of the newly constructed railway network, young men could now travel further afield to find work and make their way in life, with the possibility of better pay and working conditions. And so it was that at the age of 17, Tom left the family home and went to work for the London and South Western Railway Company. His job as an engine cleaner was not perhaps the most glamorous of occupations but he had at least left home and was making his own way in life, living as a lodger in a house in Windsor. Six years pass and Tom is now understandably looking to the future and engine cleaning is perhaps not what it was cracked up to be!

What might a young man turn to in the late 1800’s that would give him the opportunity of a steady wage and the chance to see the world?

Yes – he enlists with the Royal West Surrey Regiment in August 1886 at the age of 20 years 11 months. He signed up as a ‘stableman’, initially for ‘short service’ but then extended this to a term of 21 years. He became a career soldier, ready and prepared to serve his Queen and country. Beginning as a Private, he rose through the ranks to finally become colour Sergeant Tom Ferret! During this time, of course, Queen Victoria was on the throne until early 1901 being succeeded by Edward VII.

A brief summary of Tom ‘s career shows that he served in East India, followed by two tours of South Africa between 1899 and 1904, which of course included the period covering the Boer War, and it is here that I began to find some answers. Tom served as a Colour Sergeant directly under General Hildyard throughout the Boer War and received the Kings South Africa Medal with clasps for Tugela Heights, Relief of Ladysmith, as well as the Battle of Colenso. He was mentioned in dispatches for acts of bravery by Lord Roberts and was awarded the DCM (Distinguished Conduct Medal) in 1902.

In 1900 Queen Victoria presented Lord Roberts with 8 woollen scarves, all hand crocheted by Her Majesty, and with ‘VR’ embroidered in one corner. These were to be presented to “the most distinguished private soldiers serving in the South African Campaign” and as you will have already guessed, our Tom was one of the proud recipients. On the off chance I wrote to the military museum of the Royal West Surrey Regiment to see if they had any detailed information on these eight scarves. Their reply took me by surprise. “We’ve got your Great Uncle Tom’s Scarf – would you like to come along and see it?” Well yes!!
We went to the museum where it was carefully taken from its glass case and my father and I were allowed to hold it. The campaign medals are not held by the museum (whereabouts remain unknown) and I later discovered that the DCM was sold at auction to a private collector in 1985.

Tom was discharged from the army due to ill health and declared “unfit for further duty” in February 1905. He and his wife Martha became the publicans at the Horse and Jockey in Tylers Green where they planned to live a quiet life after the rigors of being a career soldier. Sadly the quiet life yearned for did not last. Tom died suddenly of an aneurism on 3rd February 1907 – just two years after settling in Tylers Green. Martha left the pub immediately and returned to her old family home in Middlesex where she lived with her widowed mother. She never married and for many years, according to my late father’s recollection, would display Tom’s scarf at various local events, raising money for charity.

For a number of years I have endeavoured to find Tom’s final resting place. Did Martha return him to the family home at Holybourne? Was he buried in Middlesex along with Martha’s father and her other close family. Or was Tom laid to rest at the church of St Margaret in Tylers Green where they had made their home for just two short years. After more research I have recently discovered that Tom rests in your churchyard at Tylers Green. He was buried on 9th February 1907 aged just 43. Due to the Covid-19 pandemic I have yet to visit the church from my home near Bury St Edmunds, but I would like to visit and pay my respects at the church and to also raise a glass in the Horse and Jockey in memory of Tom and Martha. Sadly, I do not know his whereabouts in the churchyard. Is he in an unmarked grave or has his headstone become too weathered to read? Are there any records tucked away that might lead us to his exact final resting place? A member of your community has very kindly taken a look around the churchyard but to date we have not located the spot. Perhaps we never will If any local folk have any information I would be only too pleased to hear from you.

In closing, I never did find out why Great Uncle Tom’s scarf was hanging on my Nan’s washing line!