AROUND 200 people, including some children from Tylers Green First and Middle Schools, attended a ceremony to dedicate 16 memorial trees planted to commemorate those named  on the St Margaret’s Church war memorial who died on active service in the Second World War.

The ceremony immediately followed the annual Armistice Day remembrance service  and two minute silence on Friday 11 November conducted by the Rev Graham Summers and John Youers from the Hazlemere  branch of the Royal British Legion, which includes Penn and Tylers Green. 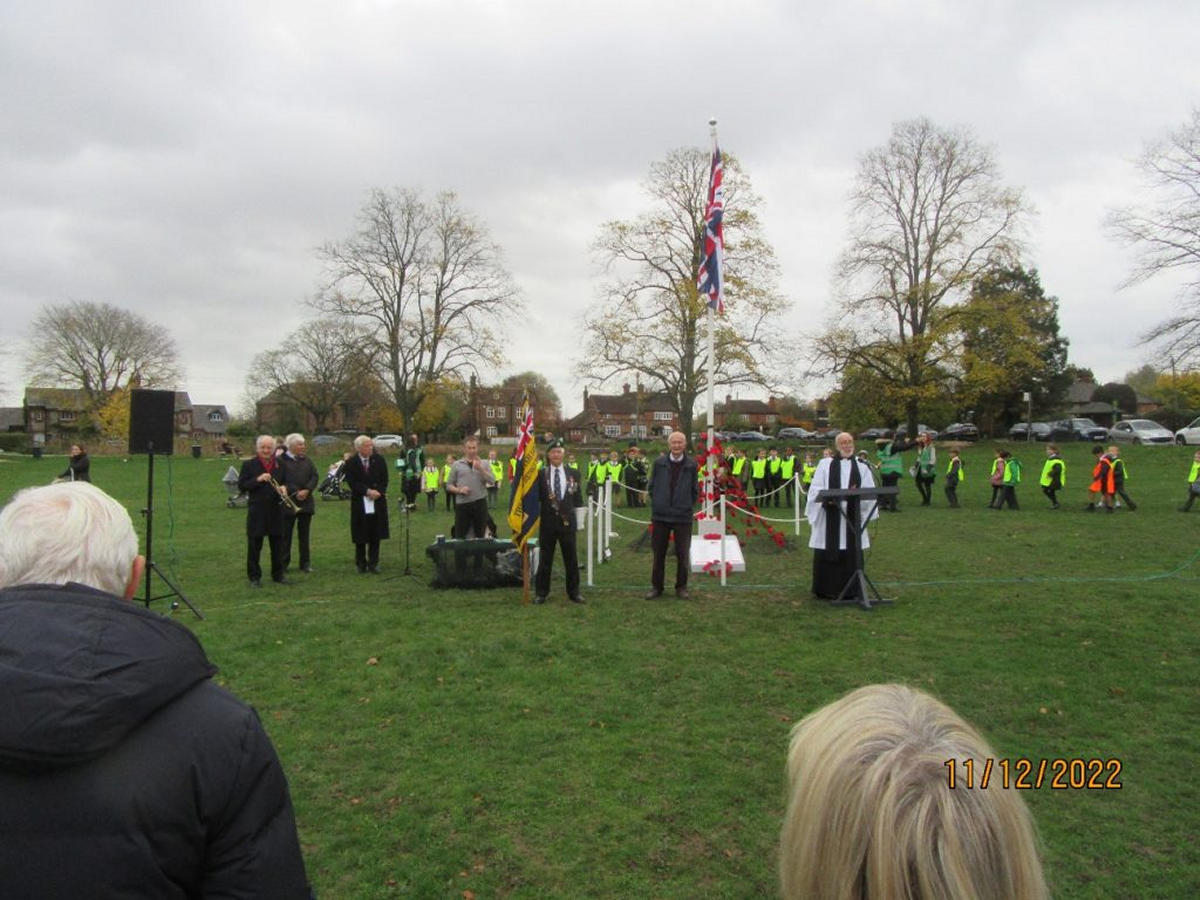 Preparing to start the Armistice Day ceremony, held for the first time on the front common. Picture: Ken Allen.

The trees  were gifted by Chepping Wycombe Parish Council, which incorporates Tylers Green within its area, and were planted in and around Tylers Green common this month. They are accompanied by a plaque and at a later stage an interpretative board will be erected highlighting locations and background.

The trees – whitebeam and rowan – join other memorial trees that have been planted in earlier years in and around the common to mark the Tylers Green fallen in the First World War.

Earl Howe told the gathering: “It is a privilege for me to dedicate these 16 trees.  The dedication has two strands to it.  The first is a dedication to the memory of Her late Majesty Queen Elizabeth whose Platinum Jubilee, at her request, is being marked throughout the year by the planting of trees across the country as part of the Queen’s Green Canopy.

“The second dedication is to the 16 men who served and died during the Second World War and whose names are commemorated on the war memorial at St Margaret’s Church.” 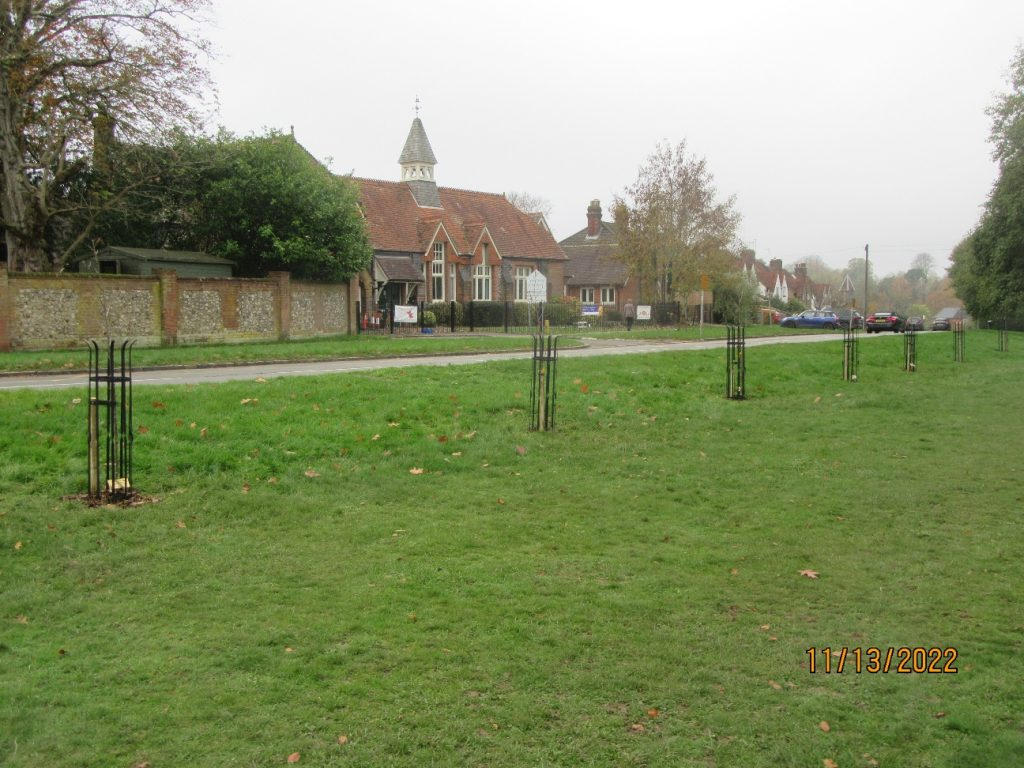 Cllr Katrina Wood, chairwoman of Chepping Wycombe Parish Council, thanked all those who had helped with the project and in particular Cllr Haydn Darch who instigated it and who saw it through.

After the ceremony, Cllr Darch thanked Earl Howe for the dedication; his fellow councillors for embracing the idea and funding it and the council clerk and grounds team for the practical work.

He added: “I would also like to thank Sharon Herron and Ron Saunders for their inputs and support and John Youers and the Rev Summers for agreeing to move to the front common and incorporating the dedication into this year’s remembrance. Bill Sadler, David Byrne and Geoff Roberts deserve special mention for embracing so enthusiastically my request to reinstall the flagpole/sound system on the front common, and of their own volition producing and funding the display of names in front of it. 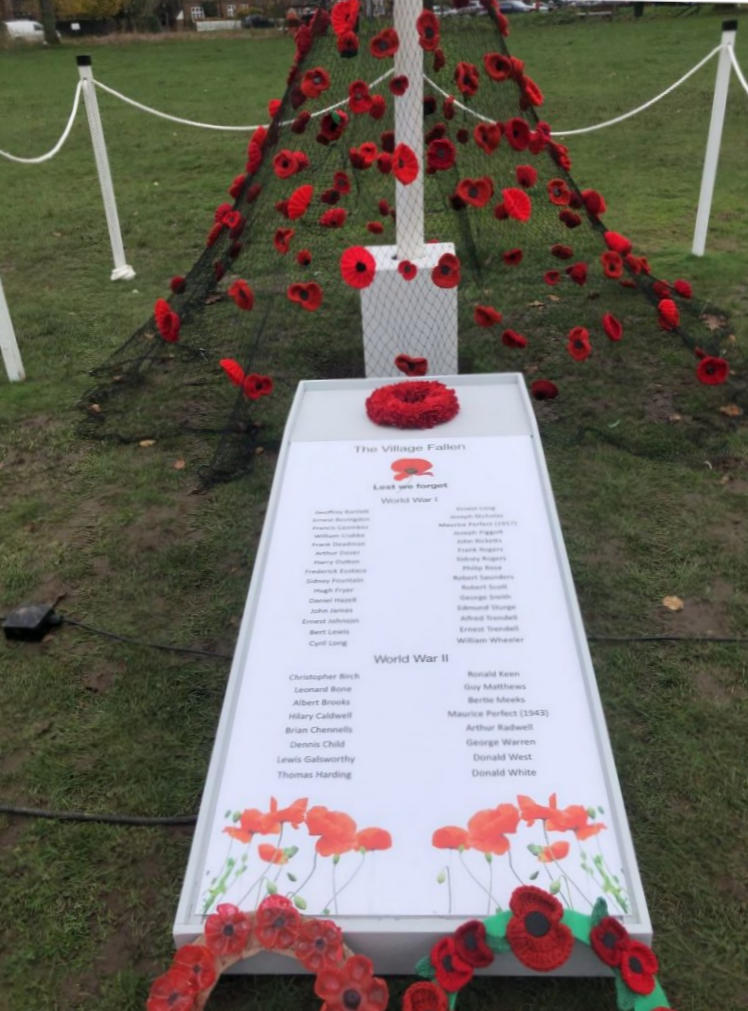 A tableau featuring names from both world wars on the Tylers Green war memorial was a centrepiece of the 11 November ceremony. It was made by volunteers at Tylers Green Village Hall.

“Lastly I would like to thank the families of Thomas Harding, Maurice Perfect and Ronald Keen for supplying photographs and giving permission for us to use them on the yet to be installed new display boards.  They attended the service and have written expressing thanks to Penn and Tylers Green for remembering and marking the ultimate sacrifice  these and the other men made.

“It is intended to continue holding the remembrance service on the front common in similar fashion rather than the back common as  in the past, joining the other important events held there throughout the year that help create the real sense of community which makes Penn and Tylers Green such a special place to live and bring up children.”

First published in the Penn and Tylers Green Blog, by Peter Brown,
and reprinted in Village Voice Issue 213, Dec 2022/Jan 2023